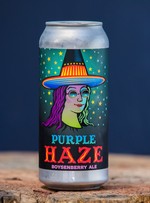 As a beer named after the most recognizable of Jimi Hendrix tunes, it's interesting to note that the song’s colorful imagery came to Jimi in a dream. In a 1969 interview, he said “I dream a lot and I put a lot of my dreams down as songs." Sixteen years later, McMenamins dared to dream and became the first brewery in the U.S. to legally use fruit in the creation of ales. We still craft our flagship Fruit Ales exactly as we first did. We aim to make them light, crisp and refreshingly fruity. Purple Haze, a favorite and often requested recipe for over twenty years now, is brewed using locally malted 2-Row and 42 pounds of Oregon boysenberries in every batch.